Thank you for keeping up with my latest adventures.

I am writing to explain that due to the Italianate nature of this blog I have decided to create a new blog for general updated about my career and life. To check it out click the following link Joseph Michael Brent's Blog.

I will keep this Joe Brent In Italy blog and reserve it for the engagements that take place in Italy.

Thank you for your support and interest.

One year ago today I created this blog as an outlet for my experiences, a venue for those interested in hearing about my adventures, and a way of expressing my gratitude for all of your contributions.

In his year I performed Rodolfo in La Boheme three times in Italy; one out door concert; I sang twice for italian television at the San Marino television station [Terrazzal Kursaal and Benefit concert for the Emilia-Romagna victims of the earthquakes in that region]; I sang for the San Francisco Giants; met the Sinatra Family; Sang a Halloween concert at the Fox Theatre; Sang both my first Hoffmann and my first Tamino; Sang and played my first Messiah; gave my final bass recital; made my debut as a director; saw 23 hours of opera at the Met in one week (Giulio Cesare, Rigoletto and the entire Ring Cycle).

I am considering that it might be time to change the format and change the title, rather than start a new blog.

As I mentioned earlier, this summer I am singing Hoffmann with the Martina Arroyo Prelude to Performance program and it would be nice to make updates for those interested in hearing about and reading about the latest updates.

With this post I also celebrate the completion of my second year as a Doctor of Music student at the University of Georgia. In the semester I was accepted in to the Blue Key Honor Society, Awarded the Director's Excellence Award and became the official recipient of the Hoveland Opera Fellowship.
This morning I will sing some selections for the Board of Visitor (a list of this group called the "Board of Visitors:"

Thank you to everyone who continues to be a part of my life!!

January and February were challenging months. I performed my first Tamino in UGA's production of Mozart's Die Zaberfloete.

I had the munificent opportunity to be directed by the brilliant and galvanizing Carroll Freemann.

More on this experience soon.

My primary reason for writing, beside to share the success of the Magic Flute run, is to share great news. I will be singing E.T.A. Hoffmann in Martina Arroyo's Prelude to Performance program this summer in New York City.

This is great news and I could not have asked for it to come at a better time. 2013 is turning out to be a busy, but artistically beautiful and enriching year.

My success is the result of the inspiration and hard work from all those who know me, teach me and help me. I share the success and owe it to them, my support system: the complex of faculty here at UGA and from my past; my family; my friends.

Sum up of the last few months

For those of you who make the effort to stop by, thank you!

I sang the Tenor Solo for St. Gregory the Great episcopal church's Messiah on the 16th.
I also played in the orchestra. A double duty evening indeed! The performance was well received and I would like to take the opportunity to thank Dallas Bono for the opportunity to make music with his group in every capacity I know how.

Keep your fingers crossed for me and the out come of the audition process. I have now stepped into the beginning of a long journey in which I will audition constantly, and if I am like everyone else, find varied success.

Cheers to 2012, a year of significant change and yet.. more of the same.

Happy Holidays to all!
Joe
Posted by Joseph Michael Brent No comments:

A Taste of Hoffmann

For those of you who were unable to see UGA's Tales Of Hoffmann here are some photos of the performance.

I want to thank Victoria Fox (Nicklausse - Muse), Elisabeth Slaten (Antonia), Evelyn Shreves (Olympia), Kelsey Fredriksen (Giuletta), Richard Block (Dr. Miracle/Coppelius), Chris Voss (Dappertutto, Lindorf) for their great performances and collegial support. I would also like to thank Frederick Burchinal and Kathy Wright for their instruction, guidance and the inestimable experiences shared during the rehearsal period of this enormous opera. I would be remise if I did not thank Mark Cedel and the UGA symphony orchestra for nailing a challenging score and helping to make great music. Finally and certainly not least, thank you to the audience - the readers of the blog - friends and family who came to see the show, and those who were unable but sent your love and support. 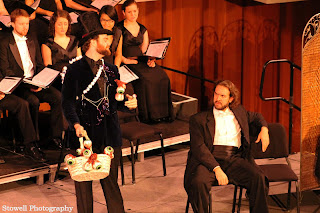 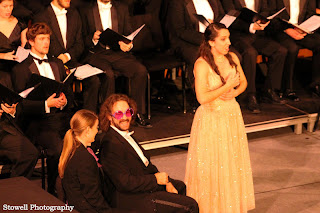 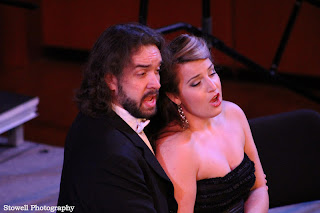 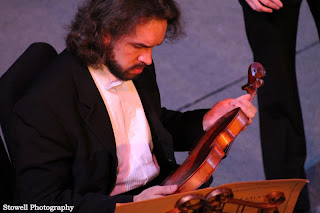 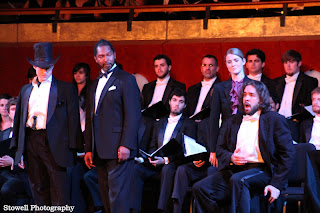 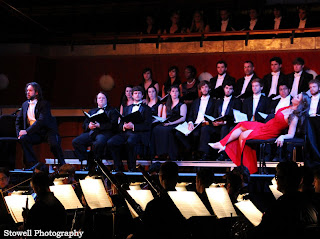 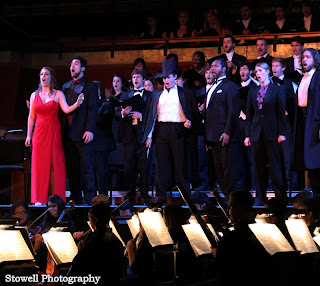 If there are those of you out there in cyberspace still reading:

I will be playing the part of Hoffmann, and what an exciting few weeks it has been here at UGA.

Please check out this link, which will bring you to an interview between Andre Gallant - of the Athens Banner Herald - and myself.

(photos and more on Hoffmann to come!)
Posted by Joseph Michael Brent No comments:

In case your were still reading

welcome back to my page.

Since returning for my 2nd year as a DMA student at the University of Georgia I have been featured in the UGA Chronicles and in the Exploring the Arts Foundation news letter.

We are preparing a Tales of Hoffmann (Offenbach) for October and I have several engagements lined up for this fall. I will be singing for the Alumni Association at the Atlanta Aquarium, at St. Gregory's church for a fundraiser, the Reynolds Plantation with the UGA opera theatre and finally on the 31st of October a Halloween concert at the Fox Theatre in Atlanta.

I wanted to use the blog, in the mean time to publish some interesting italian recipes (in translation) and continue to update about my performing career or maybe discuss operatic music.

Hope you are all well,
Joe